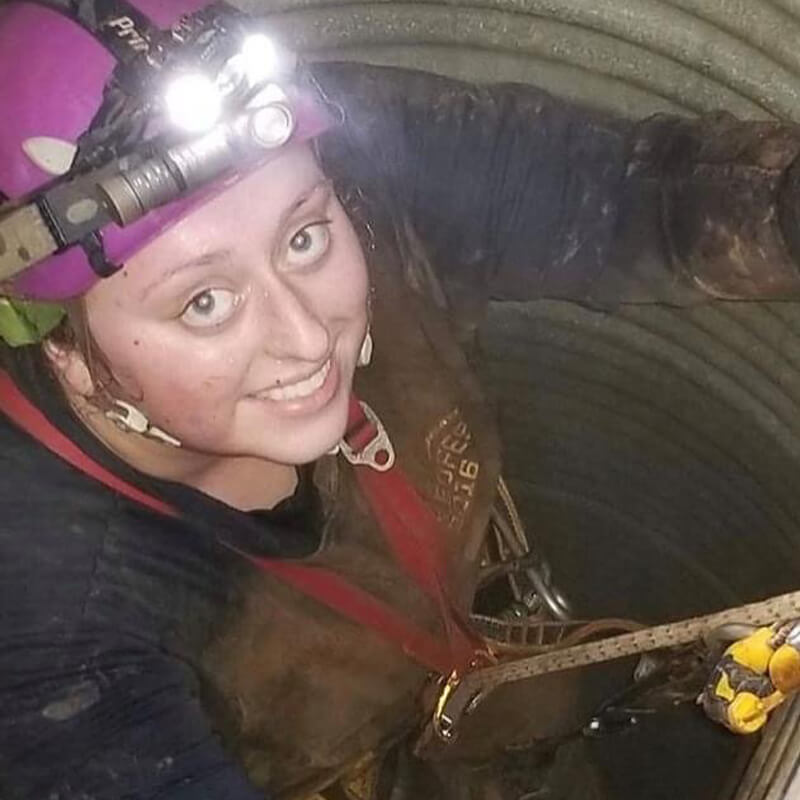 Send an Email to Chelsea!

Chelsea Ballard is our Social Media and Volunteer Coordinator.

Chelsea grew up only 4 miles from Hidden River Cave and has been fascinated with caves and sinkholes since she was a young girl. She grew up on a farm where sinkholes are an everyday challenge. While in fourth grade in 2005, Hurricane Katrina came through and several inches of rain dropped in a short amount of time. The next morning she went out to feed her ducks before school and noticed that her ducks were missing. She walked down to investigate around the pond and found a sinkhole had drained her pond and exposed an underground river system to a cave. She started to hear her ducks and sure enough, 19 ducks and 1 goose were swimming down in the cave. For 3 days, she would throw food down into the sinkhole until it could be dug out with a backhoe to free the ducks and goose. Surprisingly, all 19 ducks and 1 goose survived. From that day forward, Chelsea made a promise to herself that when she grew up, her job would be to prevent ducks from falling into sinkholes! This led her to Western Kentucky University (WKU) to major in Karst Hydrogeology where she is still attending today. During her time at WKU, she has completed two undergraduate thesis research projects with grant funding, taught a Cave Conservation and Karst Management class in Texas and completed a Physical Science Technician internship with the National Park Service. She has completed various karst related trainings, karst research projects and classes through her career. She has also worked as a cave guide with Diamond Caverns, Hidden River Cave and Mammoth Cave National Park. She is currently writing a children’s book centered around the subject of karst.

When Chelsea is not working or in school; she enjoys project caving, hiking/backpacking, kayaking, farming, gardening, traveling and spending time with her pets.

Fun Fact – Chelsea had 2 birthday parties at Hidden River Cave when she was 8 and 9 years old. She wanted to show her friends the cave in her hometown of Horse Cave, Kentucky.