noun: Geology
landscape underlain by limestone which has been eroded by dissolution, producing ridges, towers, fissures, sinkholes and other characteristic landforms.

Below is an interactive map that shows karst areas in the United States. A very special thank you to ACCA member, B.W. Szukalski for putting this together for us!

*Make sure to click on the >> to show Details and the Legend.

Karst is a unique landscape that is characterized by caves, sinkholes, springs and disappearing streams. Approximately 20 percent of the United States is underlain by Karst and few Americans living in these special areas understand the geologic conditions and/or how to prevent environmental problems associated with karst regions.

Caves and karst resources include valuable groundwater supplies, endangered species, important archaeological deposits and unique and irreplaceable mineral formations. Lack of awareness of the karst topography in cave localities leads to a variety of human induced land use problems such as flooding, sinkhole collapse and groundwater contamination.

Thousands of caves in the U.S. have suffered significant damage to their mineral formations from vandalism and careless visitation. Some of the nation’s most extensive cave systems, including Mammoth Cave National Park, are impacted by groundwater pollution from development and urban sprawl. Numerous cave species have been included on the federal Endangered Species list, a testament not only to their rarity but to human impacts on their populations. Archaeological resources in caves have been decimated the world over.

Although millions of Americans live in karst areas and are affected by problems related to them, most Americans do not have a good understanding of these resources. Cave resources are “out-of-sight” and therefore, “out-of-mind.”

A large part of our mission is providing educational services to bridge the gap between what scientists know about karst regions and what the public needs to understand in order to adapt successfully to karst landscapes.

Living With Karst A Fragile Foundation was published in 2001 as part of the American Geosciences Institute’s (AGI) Environmental Awareness Series.

The booklet details the issues associated with living in karst areas and offers scientific and technological ways to address environmental concerns. The authors are experts in their fields and the booklet is easy to read with photos and illustrations explaining how caves form, how to protect groundwater, ecology and archaeology – the historical importance of caves and environmental and engineering concerns.

ACCA is proud to be one of the publishing partners for Living With Karst. Please click on the booklet cover to download a PDF.

For more information on AGI please visit their website:

© 2001 American Geosciences Institute and used with their permission. 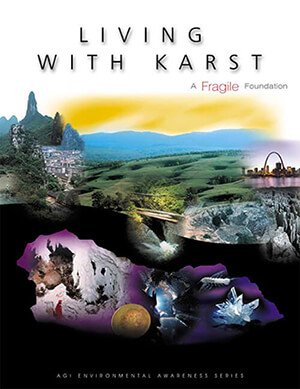